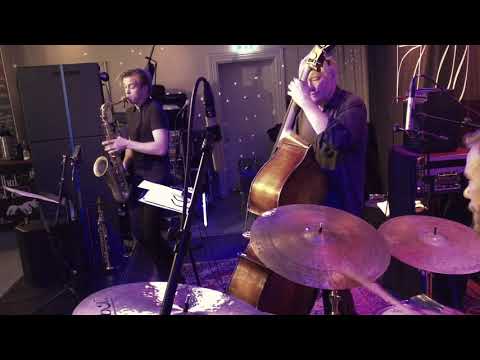 This newly-formed Trio will explore music from Kenny Garrett’s seminal recording, Triology. This International group of young musicians was formed when Berlin Based/Norwegian Drummer Amund Kleppan met British Saxophonist, Sean Payne and Belgian Bassist, Jasper De Roeck in London. This chordless trio will take the audience on a journey through the recording’s powerful and complex repertoire featuring selections such as Delfeayo’s Dilemma, Giant Steps and Pressing the Issue and many more. Amund Kleppan is a 23-year-old Norwegian drummer and composer based in Berlin, where he is currently studying at the Jazz Institute Berlin. He released his debut album Venture last autumn which was well received internationally. Amund has played with names such as Arild Andersen, Marius Neset, Randy Ingram and Marcin Wasilewski. He won Lillehammer Jazzfestival’s Talent prize in 2017. Sean Payne is a London Based Saxophonist and Composer. At the age of 13, Sean was the youngest ever finalist in the first ever BBC Young Jazz Musician of the Year 2014. Sean has had the opportunity to play and share the stage with many great players including Kit Downes, Nigel Hitchcock, Clark Tracey, Laurence Cottle, Gwilym Simcock, Alex Garnett, James Maddren, Mark Nightingale and Tom Cawley. Sean was a Semi Finalist in the first ever Michael Brecker International Saxophone Competition held in Eilat, Israel 2018. Jasper De Roeck is a Belgian double bassist and composer. Jasper is part of various jazz groups and plays regularly in some of Belgiums finest jazzclubs. He is well known for his work with Serendip with whom he won the Sabam for Culture prize in March 2019. Jasper moved to London in September 2019 to study jazz at the Royal Academy of Music. Through his studies in London he has studied and played alongside the likes of Dave Holland, Chris Potter, Jasper Hoiby, Kit Downes, Anders Jormin and many more of the UK's finest musicians.