Legendary Brazilian jazz-funk trio Azymuth announce their long awaited return to Europe in 2022. Arguably the most successful band in Brazil, they’ve played with just about everyone throughout its golden era of MPB, jazz, soul, funk, including Jorge Ben, Milton Nascimento, Marcos Valle, Tim Maia, and Elis Regina to name just a few. Azymuth’s influence on electronic music around the globe is also unquestioned, and they’ve collaborated with the likes of 4hero and Jazzanova, and been remixed by Theo Parrish, Ron Trent and Global Communication and Daniel Maunick amongst others. 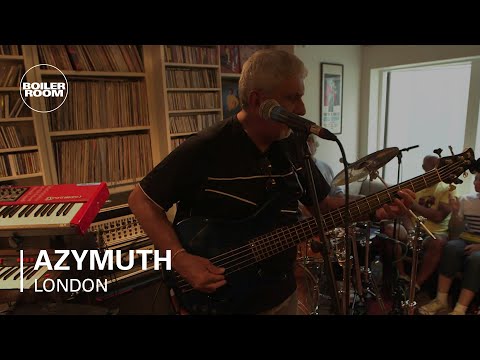 Azymuth’s most recent release via Far Out Recordings was the critically acclaimed  series of previously unreleased demo recordings from the early 1970s. Before that was 2016’s Fênix - the group’s first album with new keyboardist Kiko Continentino. But when they’re not touring and working on new Azymuth material, now in their seventies, they remain busy with their solo projects. Drummer Ivan Conti released Poison Fruit in 2019, and bassist Alex Malheiros has a brand new solo album Tempos Futuros.

Formed in 1968 in Rio de Janeiro, Azymuth are responsible for carving out an entirely new sound, fusing jazz-funk with samba to create their own unique genre, referred to as ‘samba doido’ (crazy samba). They have recorded over thirty albums throughout an astounding five decade career.

An Azymuth live show is a journey through the full spectrum of their brilliantly coloured expressionist funk, with all the cosmic energy and masterful musicianship you’d expect from the world's greatest three-man orchestra.