DUE TO PHENOMENAL PUBLIC DEMAND, RONNIE SCOTT'S PRESENTS THIS SHOW AT THE ICONIC MANCHESTER BRIDGEWATER HALL ONE NIGHT ONLY ON FRIDAY 3rd MAY  CLICK HERE FOR TICKETS AND INFO

50 years ago, magic was made on the stage of the Sands Hotel and Casino in Las Vegas, when the timeless cool of Frank Sinatra met the robust swing of the Count Basie Orchestra. Sinatra at the Sands has remained a beloved classic ever since, the perfect marriage of old-school pop and big band jazz. 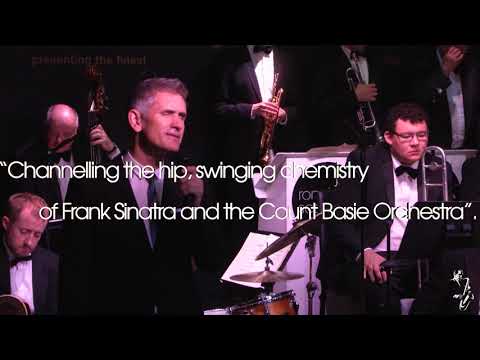 Singer, songwriter and saxophonist Curtis Stigers has been bringing those worlds together in his own music for the last three decades (along with touches of nearly every other genre one could call to mind), which makes him an ideal candidate to reinterpret Ol’ Blue Eyes’ cherished repertoire for modern ears. On his twelfth album and ninth release for Concord Records, One More for the Road, Stigers captures the rare alchemy of hipness, elegance, playfulness and feeling that made Sinatra’s renditions of these songs immortal while adding his own unique twist.

On One More for the Road, due out January 20, 2017 via Concord Jazz, Stigers finds his own version of that elusive Sinatra-Basie chemistry with the virtuosic and ebulliently swinging musicians of the Danish Radio Big Band. Recorded in the band’s headquarters, the acoustic marvel that is the DR Koncerthuset in Copenhagen, the bristling live recording features the DRBB playing vibrant takes based on the original Nelson Riddle and Billy May arrangements, which can’t help but spark inspired vocal performances from Stigers.

Singing in front of a great band executing flawless reinvigorations of those arrangements “is just extraordinary,” Stigers says. “It’s like sex. I don’t think there’s a more swinging band in the history of music than the Count Basie Orchestra, and then you get these classically trained Danish musicians who have really studied this stuff and played together so much, it makes it easy to fit into that and sing these amazing songs. It’s the most fun I’ve ever had, and I think it shows on the record.”

One More for the Road isn’t meant to be a recreation of Sinatra at the Sands, but uses that classic album as a launching pad for a full-blooded set of Sinatra’s best-loved tunes. Eight of the new album’s ten songs, recorded during Stigers’ now-annual January concerts in Copenhagen, come from that 1966 concert in the Sands’ Copa Room, but the setlist is also supplemented by Stigers’ takes on “Summer Wind” and “They Can't Take That Away From Me.”

Just as the album’s track listing isn’t a carbon copy of its inspiration, Stigers was careful to avoid being a slavish imitation of Sinatra, making each song its own while retaining the essence of the Chairman’s unforgettable interpretations. “Singing these songs live is a lot of fun,” Stigers says, “but going into the recording I had to figure out how to make this not be just the most fun karaoke that you can possibly do with an incredible band. I seldom sing a song the same way twice, so I made the songs my own as much as I could. I try not to sing like Sinatra, but there’s no way that some Sinatra doesn't get in there. There are certain phrasings that he used that work so well with the arrangements that I couldn’t not use them. It’s a fine line to walk, but as a jazz singer and as a recording artist, I’ve always tried to do everything different every time.”

That’s an apt summation of Stigers’ wildly diverse career, which has never stopped taking interesting turns ever since he released his self-titled 1991 debut on Clive Davis’ Arista Records, spawning the hit singles “I Wonder Why,” “You’re All That Matters to Me” and “Never Saw a Miracle.” He also contributed a cover of Nick Lowe’s “(What’s So Funny ’Bout) Peace, Love and Understanding” to the soundtrack of The Bodyguard, which went on to sell more than 40 million copies. During the next decade he released two more genre-blurring albums on Arista and Columbia while touring extensively, always letting his jazz roots bleed over into his pop, soul, blues and Americana endeavors.

As the millennium turned, however, Stigers decided he wanted to more deeply explore those roots. He signed to Concord Records, where his mentor, soul-jazz piano great Gene Harris, also recorded. Beginning with Baby Plays Around in 2001, Stigers has released a series of albums on Concord that explore the full range of his musical interests, often giving a classic jazz spin to rock, pop and country songs by everyone from Sting and Paul Simon to Merle Haggard and Willie Nelson.

His restless imagination has also led him into a variety of unusual opportunities, including recording a version of Cole Porter’s “Well, Did You Evah!” with Seth McFarlane, creator of Family Guy and American Dad, who then invited Stigers to make a cameo in his movie Ted and perform a song in Ted 2. Stigers also co-wrote and sang the theme song for the acclaimed TV show Sons of Anarchy, which earned him an Emmy nomination, and made multiple appearances on The Tonight Show, The Late Show with David Letterman and The Today Show, among other television programs worldwide.

Stigers has been a voracious listener ever since he bought his first record, Elton John’s Goodbye Yellow Brick Road, when he was just a second grader in Boise, Idaho. While he didn’t come around to Frank Sinatra’s music until later, he remembers the iconic singer always being a presence in the popular culture of his youth. “Sinatra was everywhere,” Stigers recalls.

“Even in the ’70s when he wasn't ‘cool’ anymore for a while, he was still always a part of my world. He didn't really mean anything to me, though, until I got into college and I discovered this record called Frank Sinatra Sings for Only the Lonely that just knocked me out. Suddenly it hit me that the way he told a story was better than anybody ever in popular music. His ability to take the lyrics that somebody else wrote and make them a part of his life, as if they were written about him—that’s what kills me. He becomes that song when he sings it.”

Stigers absorbed those lessons in his own music, always focusing on telling the story of the song, touching and communicating with an audience, rather than showing off his (admittedly prodigious) vocal chops. “The older I get the more I think of myself not as a singer who can do cool things with his voice,” he says. “When I was a kid all I wanted to do was scat sing and prove that I was a great. Now I just want to tell a story. Now I want to have the people in the audience or the people listening to my records feel the same way about these songs that I do, that they’re these amazing little three- or four-minute short stories.”