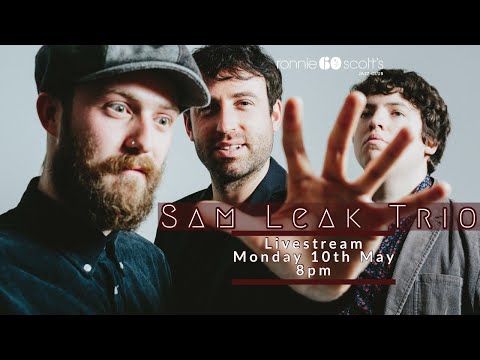 The Sam Leak Trio perform contemporary jazz with a gospel-tinged, and folk-inspired, freedom and abandon. Conjuring up the joy and emotion typified by Paul Bley and Keith Jarrett’s 1960s trios, the ensemble maintains a sense of the tradition whilst performing music that is very much rooted in the UK Jazz movement of the moment. The band mainly perform Sam's original material, notably including the music from his recent album release “Adrift,” recorded in duet with Lee Konitz/Ben Wendel pianist Dan Tepfer, and which Marcus O’Dair has called ‘astonishing.’

Described as “compelling” and “reaching far beyond the jazz loop” by the Guardian's John Fordham, ‘Adrift’ is a unique composition for two pianos that explores the range of colours and possibilities offered by the unconventional lineup. Sometimes densely complex, at others eerily sparse; the writing is engaging and melodic, conjuring up images of a snow-brushed New York in winter. The composition was originally written for 2014’s Steinway festival, held at London’s Pizza Express Jazz Club. The success of this performance led the pianists to record the album at the Yamaha Piano Rooms in Midtown New York in January 2016. In 2018 Sam's trio recorded, and filmed, their own take on the suite which can be viewed on YouTube.

"Multi-faceted and smart as a pin, this is poetic chamber jazz of a very high order" MOJO  ââââ

"This is assured and sophisticated acoustic jazz with deep roots in the tradition, that knows exactly what it's trying to do - and succeeds" Daniel Spicer, BBC Music Magazine

"The Royal Academy of Music's jazz programme has produced a remarkable crop of newcomers in recent times: notably the Mercury-nominated pianists Gwilym Simcock and Kit Downes. Now comes Sam Leak, an artist of comparable promise...Leak is a subtle storyteller who keeps the grooves and colours changing."  John Fordham, The Guardian

Double bassist Simon Read has been described as 'notable for his wonderful melodic displays' and 'wringing the maximum feeling from each song' (The Whitman Review). Having studied at Leeds College of Music from 2009-2012, under the tutelage of UK free improvisation legend Dave Kane, he's quickly become a much-respected face on the London Jazz scene performing regularly with the Adrian Cox Quartet, Latchepen, and Joe Webb.

Will Glaser is a London-based drummer and percussionist who is known for his "exciting" and "wonderfully fidgety style" (The Guardian). He is has performed in the bands of musicians including Soweto Kinch, Dame Cleo Laine, Yazz Ahmed, and Liam Noble. His influences draw eclectically from across jazz history, improvised music and anywhere else, from Baby Dodds to Milford Greaves, Max Roach to Paul Motian, Roy Haynes to Joey Baron or Ed Blackwell to John Bonham. Will can be heard playing anything from traditional Jazz, in straight ahead settings to improvised music or avant rock.