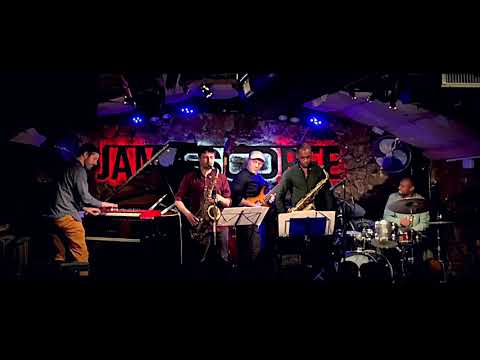 In what will prove to be a very special "restart" to live touring, Michael Janisch makes his first live appearance on Ronnies' stage after being sidelined for well over a year due to the Covid Pandemic.  A US-native who has lived in London for 17 years, he's established himself as a first-call electric and double bassist to the stars, a MOBO-Award nominated solo artist, an in-demand producer, and founder of Whirlwind Recordings, one of the premiere indie labels in jazz and related music.

His latest release Worlds Collide is an electro-acoustic joyride of original material recorded at Abbey Road Studios, combining contemporary jazz alongside free improvisations and soaring melodies over multi-metered grooves, paying homage to artists as diverse as Ornette Coleman, Fela Kuti & Afro-Beat to the electronic music pioneer Aphex Twin. The album has been a hit on streaming sites with well over 1,000,000 global plays to date as well as one of 2019's most talked about and covered releases.

Joining Janisch (on basses) for his live shows is his London-based band which showcases some of the finest performers in the UK today: Nathaniel Facey on alto saxophone (Empirical, Gary Crosby OBE), George Crowley on tenor saxophone (Melt Yourself Down, Yazz Ahmed), Rick Simpson on piano/keys (Christian Scott, Leo Richardson), and Shane Forbes on drums (Soweto Kinch, Empirical).

Read about the band in Jazzwise here.