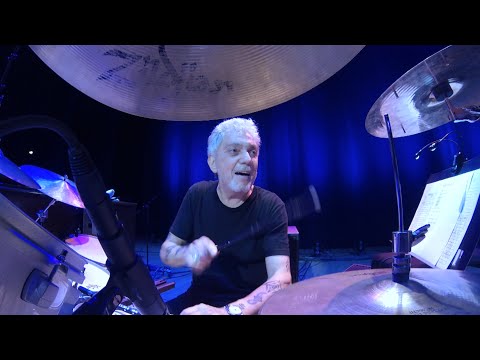 One of the most influential drummers of all time, Steve Gadd set a new standard in contemporarydrumming techniques and performance, and in doing so launched a thousand imitators.

Recording so many legendary drum tracks like; " Aja"," Fifty Ways to Leave Your Lover" and "Nite Sprite", there is no drummer alive today who in some way has not been effected by Steve Gadd. His influence is still very much felt and can be heard in the playing of everyone fromVinnie Colaiuta to Carter Beauford. And still to this day there is no one who can get "inside" a tune and find the "pocket" quite like the great Steve Gadd.

Steve Gadd is one of the most sought-after studio musicians, in the world. Regarded as one the most influential drummers in contemporary music, Gadd can play anything, easily bridging different musical styles. His feel, technique, and musicality on such tunes as Paul Simon's "Fifty Ways", Steely Dan's "Aja", and Chick Corea's "Nite Sprite" were so awe-inspiring and his concepts so innovative that they instantly assured his special position in the history of the percussive arts. Gadd attended the Manhattan School of Music for two years, and then went on to finish at Eastman School of Music. Prior to that, he studied privately with Bill and Stanley Street and John Beck. He established himself with the great Chuck Mangione, and then spent three years in the Army prior to coming to New York City for studio work

in 1971. Gadd rapidly rose to prominence on the studio scene. His resume includes a variety of artists, including Carly Simon, Phoebe Snow, Aretha Franklin, Al DiMeola, Stanley Clarke, Rickie Lee Jones, Tom Scott, Frank Sinatra, and Stuff. After a period of touring and recording with his own band, the Gadd Gang, he provided the spark that ignited Paul Simon's South African inspired, Grammy Award-winning recordings and dynamic live touring band.

David Spinozza is an American guitarist, composer and producer. He began his professional recording career as a teenager in the 1960’s, swiftly becoming a sought after New York studio musician and soon signing with A&M Records as a solo artist.

Jimmy Johnson is an American bass guitarist best known for his work with James Taylor, Allan Holdsworth, Lee Ritenour and Flim & the BB's. Raised in a rich musical environment, his father was a 47 year member of the Minnesota Orchestra's bass section, his mother a piano teacher and accompanist, and his brother Gordon, also a professional bassist. In 1976, Johnson worked with Alembic and GHS to create one of the first 5-string bass guitars with a low B string. Living in the Los Angeles area since 1979, Johnson continues to record and tour with singer-songwriter James

Taylor as well as guitarist Allan Holdsworth, and is frequently heard with various groups at The Baked Potato Jazz club in Studio City, California.

Steve Gadd Band has released 4 albums to date. Their 2016 release, “Way Back Home”, a CD and double DVD set recorded live at the Xerox Rochester International Jazz Festival in 2015 was nominated for a Grammy Award. Their 2018 release “Steve Gadd Band “won a Grammy Award for Best Contemporary Instrumental Album.