Blanchard makes music by now elemental to the contours of modern jazz. Blanchard’s arc of growth and change has, for decades, been consistent yet never predictable.” WALL STREET JOURNAL 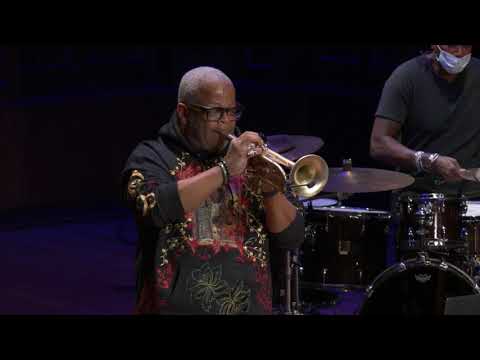 Terence Blanchard stands tall as one of jazz’s most-esteemed trumpeters and defies expectations by creating a spectrum of artistic pursuits. A twice Oscar-nominated film score writer/arranger (most recently for his Spike Lee collaboration on Da 5 Bloods), he’s also championed as a two-time opera composer whose Fire Shut Up in My Bones opens New York’s Metropolitan Opera 2021-2022 season—the first African American to have an opera at the Met. In addition, Blanchard teaches as the Kenny Burrell Chair in Jazz Studies at the UCLA Herb Alpert School of Music. But there’s a center of gravity. It’s Blanchard’s beautiful, provocative, inspiring jazz recordings that undergird all these projects. The same holds true now as it did early in his career in 1994 when he told DownBeat: “Writing for film is fun, but nothing can beat being a jazz musician, playing a club, playing a concert.”

In his thirtieth year as a recording leader, the six-time GRAMMY winner delivers Absence, a masterwork of sonic zest in collaboration with his longtime E-Collective band and the acclaimed Turtle Island Quartet—led by violinist/artistic director David Balakirshnan and featuring Gabe Terracciano on violin, Benjamin von Gutzeit on viola, and Malcom Parson on cello—a game changer since its founding in 1985 as a group playing hybrid music. It may seem like an irregular pairing, but Blanchard discovered that the quartet proved a perfect fit. “Obviously I’ve worked with strings in my career,” he says. “But Turtle Island has reimagined the language for the string quartet. It’s extremely unique, and what they do is brilliant. Playing together, it’s like a chamber jazz ensemble.”

Recorded in February 2020 at the Mo Austin Recording Studio at UCLA just before the Covid-19 lockdowns, Absence started out as a project to show gratitude to Wayne Shorter. “I knew that Wayne wasn’t feeling well at the time, so I wanted to honor him to let him know how much he has meant to me,” says Blanchard who today lives in Los Angeles as well as in his native New Orleans. “When you look at my own writing, you can see how much I’ve learned from Wayne. He mastered writing compositions starting with a simple melody and then juxtaposing it against the harmonies that come from a different place to make it come alive in a different light. That’s what makes the beauty of it. This album is about composition—not just his works but writing our own music to see how much he’s influenced us.”

As in past E-Collective recordings, Blanchard gives free rein to his synth-inflected ensemble—pianist Fabian Almazan, guitarist Charles Altura, bassist David Ginyard, and drummer Oscar Seaton—to stretch as a band. “I give them the room to explore as arrangers,” says the leader. “It’s important for the band itself as well as for my own growth to develop new ways of playing other people’s music. The guys do things that I would have never thought. We try to create something unique. With Wayne, we have the chance to learn his music and really absorb it. Then we give our own impressions.”

Absence came together quicker than any of Blanchard’s other projects. He had been in conversation with Turtle Island, which had originally discussed plans for him to arrange a piece for string quartet, but those talks shifted direction. Two weeks later they were all in the studio. “What made it all so beautiful was that it was for Wayne,” says Blanchard. “He’s a funny dude, silly and brilliant. He has inspired us all. When you think about it, Wayne had come up with John Coltrane, Sonny Rollins, Sonny Stitt, Johnny Griffin, Cannonball Adderley. He came through all those guys, but he found his own voice, his way of expression. You have to give him credit, not only on his horn but also with the pencil. That’s what makes him such a great jazz artist.”

Terence Oliver Blanchard began playing piano at age 5, and later trumpet beginning in summer camps alongside his childhood friend Wynton Marsalis. While studying jazz at Rutgers University, Blanchard was invited to play with the Lionel Hampton Orchestra in 1982 before Marsalis recommended him as his replacement in Art Blakey’s Jazz Messengers. Following a string of collaborative recordings, he released his first self-titled solo album on Columbia Records in 1991, leading to a string of acclaimed often conceptual works and over forty movie scores, primarily feature films and documentaries for director Spike Lee, including HBO’s 4-hour When the Levees Broke: A Requiem in Four Acts.

Regarding his consistent attachment to artistic works of conscience, Blanchard confesses, “You get to a certain age when you ask, ‘Who’s going to stand up and speak out for us?’ Then you look around and realize that the James Baldwins, Muhammad Alis and Dr. Kings are no longer here...and begin to understand that it falls on you. I’m not trying to say I’m here to try to correct the whole thing, I’m just trying to speak the truth.” In that regard, he cites unimpeachable inspirations. “Max Roach with his ‘Freedom Now Suite,’ John Coltrane playing ‘Alabama,’ even Louis Armstrong talking about what was going on with his people any time he was interviewed. Herbie Hancock & Wayne Shorter who live by their Buddhist philosophy and try to expand the conscience of their communities. I’m standing on all of their shoulders. How dare I come through this life having had the blessing of meeting those men and not take away any of that? Like anybody else, I’d like to play feel good party music but this album is about the reality of where we are.”

“The main reasons E-Collective and I recorded this new music are two-fold,” Blanchard concludes. “1: I wanted the music to be a healing force in the areas in which we performed – to let the music take your anger and frustrations. I’m not telling people not to be angry but when things become too much, the music is there to help you heal. 2: With this administration that commands all of the airwaves everyday diverting people’s attention away from matters that are very important, my hope is that this project helps to focus the conversation and, in the heat of these events that keep happening, to keep that conversation going.