Friends and colleagues pay homage to the double bassist of choice for a multitude of legendary musicians who visited these shores during the past six decades – a list of which to be proud, included likes of Harry ‘Sweets’ Edison, Buddy Tate, Ben Webster, Stephane Grappelli, Scott Hamilton, Bill Watrous, Lionel Hampton, Peggy Lee and Mel Torme. He also held the bass chair in cornetist, Digby Fairweather’s band, ‘Velvet’, was a member of the Eddie Thompson Trio and Charly Antolin’s ‘Jazz Power’. Special mention should also be made of his fabulous contribution in the exciting ‘double trio’ ‘Oscar Peterson’ shows at Ronnie’s, when Len was paired with fellow bassist, Sam Burgess as they swung the music to rude health with pianists, James Pearson and David Newton, and drummer Matt Skelton. 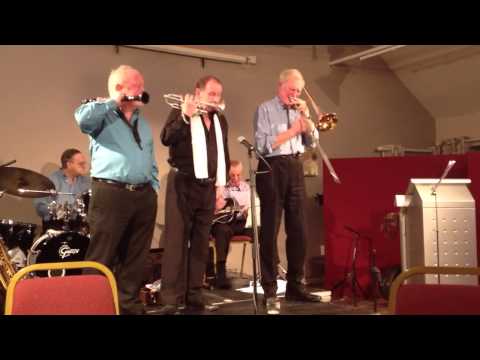 Digby Fairweather began his professional jazz career in l977, combining playing with writing and broadcasting for Jazz FM and the BBC  (l985-98), before returning to fulltime playing thereafter. He is founder of the National Jazz Archive, and co-founder of the Association of British Jazz Musicians and Jazz Section  of the Musicians’ Union. During his career Digby has recorded prolifically, written several books about jazz, broadcast regularly on the subject (BBC 1992-8) and worked with most of Britain’s leading Swing players, before forming his newest band ‘The Half Dozen’ in l995.  He received the BBC Jazz Society’s ‘Musician of the Year’ award (l979) and thereafter British Jazz Awards (Trumpet/l992 and Services to Jazz/l993), the Benno Haussman Award (Services to Jazz, l993) and the Freedoms of London and his hometown Southend-on-Sea. From 2003-7 he was musical director for blues legend George Melly, and now tours with rock icon Paul Jones (Manfred Mann et al).

Digby Fairweather played the cornet semi-professionally from l971 with British bands including Alex Welsh, Ron Russell and Lennie Hastings and  took up jazz fulltime in l977 working (amongst others) with the ‘Midnite Follies Orchestra’ ‘Velvet’ and the ‘Pizza Express All Stars’. From l983 he led a variety of projects including the ‘Jazz Superkings’ ‘The Great British Jazz Band’ and (from l995) his award-winning Half Dozen which toured with George Melly (2003-7)  Paul Jones (2207-present), and which has won the British Jazz Award – the ‘Jazz Oscar’ -  for top small group for seven years (2005/6/8/9/10/11/12). Digby’s awards include 'BBC Jazz Society Musician of the Year (l979) British Jazz Award (trumpet/1992) ‘Services to jazz’ (1993/95) and Freedoms of London (1992)his hometown Southend-on-Sea in their Millennium Role of Honour for AD 2000 and the  Worshipful Company of Musicians Jazz Medal (2011) . His related activities include founding the charity 'Jazz College' with pianist Stan Barker (l979) the National Jazz Archive/Association of British Jazz Musicians (l987) and Musicians' Union Jazz Section (l992).