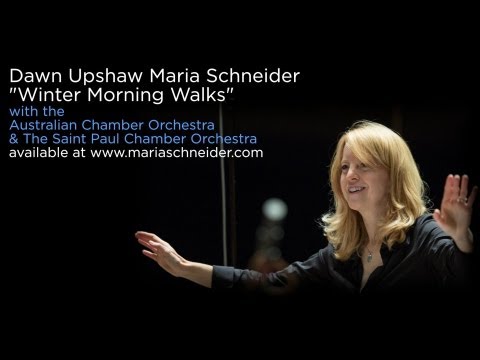 Maria Schneider’s music has been hailed by critics as “evocative, majestic, magical, heart-stoppingly gorgeous, and beyond categorization.” She and her orchestra became widely known starting in 1994 when they released their first recording, Evanescence. There, Schneider began to develop her personal way of writing for what would become her 18-member collective, made up of many of the finest musicians in jazz today, tailoring her compositions to distinctly highlight the uniquely creative voices of the group. The Maria Schneider Orchestra has performed at festivals and concert halls worldwide. She herself has received numerous commissions and guest-conducting invites, working with over 85 groups from over 30 countries.

Schneider’s music blurs the lines between genres, making her long list of commissioners quite varied, stretching from Jazz at Lincoln Center, to The Saint Paul Chamber Orchestra, to collaborating with David Bowie. She is among a small few to have received GRAMMYS in multiple genres, have received the award in both jazz and classical categories, as well as for her work with David Bowie. 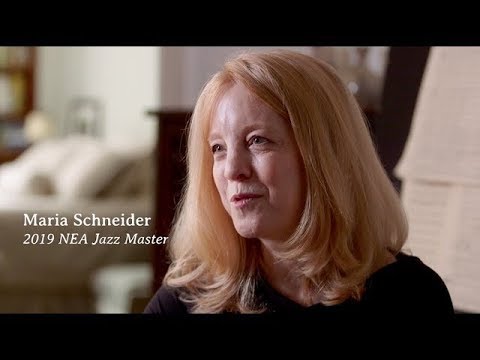 Schneider and her orchestra have a distinguished recording career with twelve GRAMMY nominations and five GRAMMY awards. Unique funding of projects has become a hallmark for Schneider through the trend-setting company, ArtistShare. Her album,  Concert in the Garden (2004) became historic as the first recording to win a GRAMMY with Internet-only sales, even more significantly, it blazed the "crowd-funding" trail as ArtistShare’s first release. She’s been awarded many honors by the Jazz Journalists Association and DOWNBEAT and JAZZTIMES Critics and Readers Polls. In 2012, her alma mater, the University of Minnesota, presented Schneider with an honorary doctorate, and in 2014, ASCAP awarded her their esteemed Concert Music Award.

Schneider has become a strong voice for music advocacy and in 2014, testified before the US Congressional Subcommittee on Intellectual Property about digital rights. She has also appeared in CNN, participated in round-tables for the United States Copyright Office, and has been quoted in numerous publications for her views on Spotify, Pandora, YouTube, Google, digital rights, and music piracy. Most recently, she and concerned colleagues in New York have launched a widespread campaign on behalf of music-makers, MusicAnswers.org.

Her recent collaboration with her orchestra and David Bowie resulted in his single called, "Sue (Or In A Season of Crime),” and brought her a 2016 GRAMMY (Best Arrangement, Instruments and Vocals).  Schneider and her orchestra also received a 2016 GRAMMY for their latest work, The Thompson Fields (Best Large Jazz Ensemble Album).

“It is soulful chamber jazz of high class –and even played with some inspiration from the “Nordic Tone”Tone” we know from ECM’s records with Jarrett or Garbarek .” ( Jazz Special magazine,Denmark)

With his outstanding technique and artistic expression, Lorenzo was immediately recognized by the media and began playing some of the most important musical venues in Europe very early.“

WE LIVE HERE, suite for jazz quartet” was the first album of Lorenzo's acoustic quartet, and has been released by the norwegian label Losen Records (www.losenrecords.com)

A big success, top ten download album in the norwegian and canadian itunes official download charts, reviews from all over the world and many concerts around Europe.

The latest release, “LOVE UNKNOWN”, confirms the Quartet as one of the more interesting surprises in the European jazz scenario. The first leg of a huge European tour will bring the quartet in Italy, Switzerland, Norway, Lithuania, Poland, France, England, Sweden, Estonia, Turkey and Denmark.

Following 2016’s ‘We live here’, this set continues to display Swiss pianist de Finti’s flowing piano lines, and the superb compositional skills of de Finti and Dall’Ora.  De Finti refers  to this music as chamber music, and the care with which they build the compositions reflects this.” (Chris baber, Jazz Views, UK)“

As this mysterious title implies, interestingly enough, Lorenzo De Finti approaches the theme in some non-obvious ways with his Quartet's second outing. As impressive as its sophisticated predecessor We Live Here (Losen, 2016) was, the compositions (again a joint endeavor with bassist Stefano Dall'Ora) and the group's chemistry are advanced a step further on Love Unknown.
It's a gripping listen touching on a variety of shades appropriate to the theme: romantic, intense, sorrowful, sometimes challenging, and even mostly content in the end.”  (Geno Thackara, All About Jazz, USA)

Tell us what you think of The Ronnie Scottâs Jazz Orchestra conducted by Maria Schneider , support: Lorenzo De Finti Quartet below..