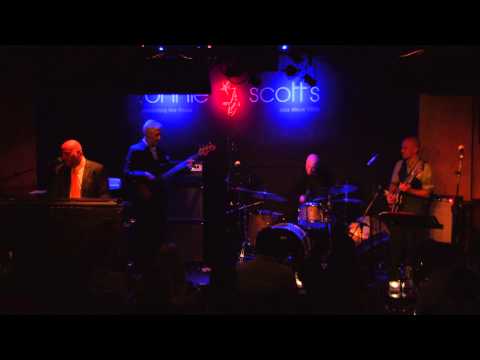 The James Taylor Quartet (or JTQ) are a British four-piece jazz funk band, who have become renowned for their live performances. They were formed in 1987 by Hammond organ player James Taylor following the break-up of his former band The Prisoners in the wake of Stiff Records’ bankruptcy. The current line-up is James Taylor (Keyboards and Orchestration), Mark Cox (guitar), Andrew McKinney (bass) and Pat Illingworth (drums), although recordings and live performances usually feature vocalist Yvonne Yanney.

The James Taylor Quartet’s first single, “Blow-Up” (a funked-up version of Herbie Hancock’s main theme from the seminal 1960s film of the same name), was released in 1987 on the Re Elect The President label, which would later become the Acid Jazz label. The track was championed by the NME and John Peel, appearing in Peel’s Festive Fifty chart for 1987. The band’s debut 7 track mini album, Mission Impossible (1987) followed and predominantly comprised covers of 1960s film themes such as “Alfie”, “Mrs. Robinson” and “Goldfinger” in a rough, up-tempo, almost punk-like style, that was primarily focussed on Taylor’s Hammond organ playing. Their second album, The Money Spyder (1987), was the soundtrack to an imaginary spy film, applying the band’s distinctive style to Taylor’s own compositions.

While promoting these albums The James Taylor Quartet developed a strong reputation as a live band, that remains to this day. The live set focuses on accessible rhythm driven music, that some classify as having elements of modern dance music, despite including a lot of improvised solos. During this period a contract with a major record led to them playing to ever increasing audiences. The band recorded their signature tune “The Theme From Starsky and Hutch” featuring Fred Wesley and Pee Wee Ellis of The JBs in 1988 and this was included on their next album “Wait A Minute” (1988). Their popularity as a live act led to the release of the live album Absolute – JTQ Live in 1991, which attempted to capture the experience of the band in concert (even though it was recorded ‘live’ in the studio, the audience cheering being overdubbed later).

DAVE CHAMBERLAIN QUARTET feat. DAVE CHAMBERLAIN guitar OLLY WILBY sax DARIO DI LECCE bass MATT FISHWICK drums
"...On The Back Foot is a set that will be enjoyed by fans of straight ahead jazz, bebop and the jazz guitar. Dave Chamberlain shows (...) he is a superior improviser and a guitarist who clearly has a strong future..."