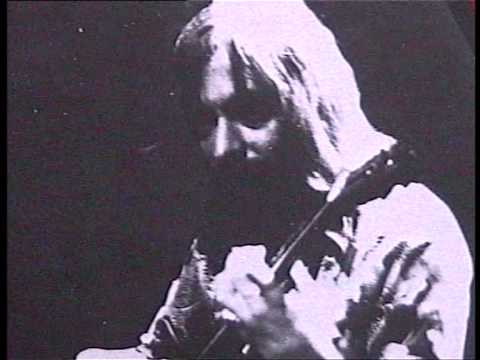 While he might be best known as a guitarist in the British jazz-rock band IF, Terry Smith started in the 1960s London jazz scene, though he also gained experience outside jazz by touring with soul singer J.J. Jackson and recording with Georgie Fame. In 1967 he was named Best Jazz Guitarist by a Melody Maker poll, and shortly afterwards, he formed a 10-piece band to back pop singer Scott Walker on tour. Twice winner of the Melody Maker Polls, Smith spent the early 1960s playing with the Tony Lee Trio, before becoming Scott Walker’s MD accompanying the Walker Bros on their Japan tour in 1968. Returning to the UK he recorded a a solo Album, Fall Out (1968), which was produced by Scott Walker, and backed by UK jazz Musicians of the day such as Kenny Wheeler, Les Condon, Ronnie Ross, Chris Karan. In 1969, he teamed up with saxophonist Dick Morrissey and Dave Quincy, to form the pioneering British jazz-rock group IFand was with the group for several albums in the early ’70s.  Walker was also responsible for enabling Smith to record the solo album in 1968, Fall Out . Although Walker produced the LP as well, it was straight-ahead instrumental modern jazz with no strong similarity to the music Smith played as part of his band. Instead, it featured Smith in both big band and small combo settings, playing high-grade post-bop guitar on a combination of pop standards and (with the small combo) organ-guitar-drums groove-oriented original compositions.

Around that time he also appeared with Morrissey and other top British jazz musicians on Brother Jack McDuff’s recording To Seek a New Home (1970). Smith went on to record four albums with IF’s original line-up, as well as touring the U.S. and Europe extensively. Following IF’s demise, he had a brief spell in another British band, ZZebra, also with Dave Quincy. Best songs include Fibonacci’s number and Forgotten Roads. He met up again with Dick Morrissey and they appear together with Swedish jazz musicians and singer Tommy Korberg for a live recording (1975). In 1981, Smith formed his own Blues Band in 1982 with Jo Ann Kelly (vocals), Tony Ashton (organ) and Micky Waller (drums). He is still active on the UK jazz circuit.

Terry Smith started playing the guitar from the age of 16. Gigs at the Bull’s Head followed where he worked with Roy Budd, Tony Archer and Trever Tomkins. His first big name jazz work came with Ronnie Scott’s Big Band in 1967. By 1970, he was co-leading the jazz-rock group IF with Morrissey. This group had developed out of a band formed in 1968 and they were very popular in the USA. They made frequent visits and recorded seven albums for Atlantic Records. He toured around the world with this group until it disbanded in 1974 when he and Morrissey moved to Sweden. Returning to London in the late 1970s he freelanced working with Mike Carr, Don Weller, Pete King and others and was often with Tony Lee’s Trio in the 2000s.  He made frequent broadcasts for the BBC but remains a largely unknown and unappreciated figure on the British jazz scene with few jazz records to his name.

Terry Smith‘s rare late-’60s LP was an accomplished set that showcased his fluid, modern bop-influenced jazz guitar in both big band and small combo settings. Smith plays much in the style of American guitarists working in similar territory during the period, such as Wes Montgomery and Grant Green . The arrangements and playing by the backing musicians on this album, recorded in London , are a little stiffer than what you’ll hear on most U.S. sessions, but they get the job done tastefully enough. The vibe gets a little more uninhibited on the 2 tracks featuring just Smith, organist Bob Stuckley , and drummer Chris Karen . As those 2 tracks (“Fall Out” and “Early Morning Groove”) are the only 2 Smith originals, one suspects that this is the kind of material that was closest to his heart at the time. Otherwise most of the record is given to interpretations of standards, including “My Man’s Gone Now,” Cole Porter ‘s “I Love You,” and the Bacharach – David compositions “The Look of Love” and “Windows of the World.” While pop star Scott Walker produced, there’s no strong resemblance between this and the music Walker was recording at the time, though Walker did make suggestions regarding the material.

Tell us what you think of Leon Greening Trio plus special guest Terry Smith below..