Four-time Grammy winner Stanley Clarke is quite possibly the most celebrated acoustic and electric bassist in the world. As a performer, composer, conductor, arranger, recording artist, producer, and film scorer known for his ferocious dexterity and consummate musicality, Clarke is a true pioneer in jazz and of the bass itself. Unquestionably he is a “living legend,” lauded with every conceivable award available to a musician in his over 40-year career as a bass virtuoso. 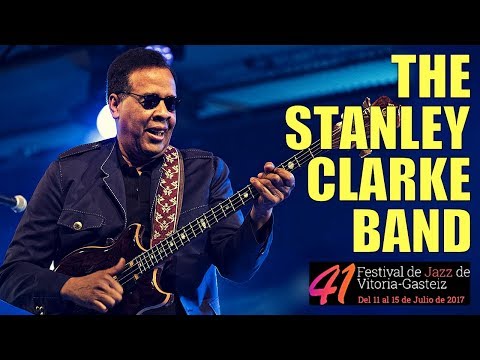 Clarke’s incredible proficiency has been rewarded with: four Grammys, gold and platinum records, Emmy nominations, an honorary Doctorate from Philadelphia’s University of the Arts, and much more. He was Rolling Stone’s very first Jazzman of the Year and bassist winner of Playboy’s Music Award for ten straight years. Clarke was honored with Bass Player Magazine’s Lifetime Achievement Award and is a member of Guitar Player Magazine’s “Gallery of Greats.” In 1999, Clarke put his hands in cement as an inductee into Hollywood’s “Rock Walk” on Sunset Boulevard. In more recent years, in 2011 he was honored with the highly prestigious, Miles Davis Award, at the Montreal Jazz Festival for his entire body of work. He was even honored with the key to the city of Philadelphia. Most recently, Clarke won the 2013 Downbeat Magazine’s Reader’s and Critic’s Poll for Best Electric Bass Player.

Digging through the great multitude of accolades bestowed upon Stanley reveals an interesting phenomenon. It is difficult to remember how limited the potential career path of a bass player was before he came on the scene. Stanley almost single-handedly took the bass out of the shadows and brought it to the very front of the stage, literally and figuratively.

The traditional role of the bass was largely one of time-keeping that sonically filled out the spectrum. Clarke says: “Before I came along a lot of bass players stood in the back. They were very quiet kind of guys who didn’t appear to write music. But many of those bass players were serious musicians. All that I did was just take the step and create my own band.”

Tell us what you think of Stanley Clarke Band feat. Cameron Graves below..