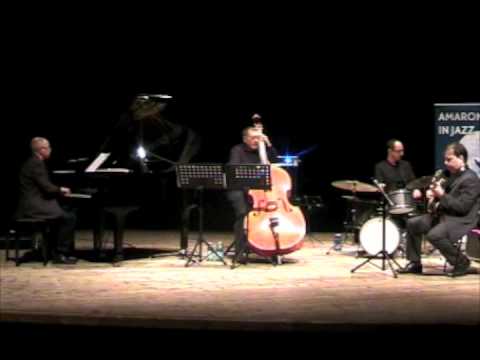 Paolo Birro was born in Noventa Vicentina, Vicenza, Italy in 1962.  He completed his classical piano studies at the Vicenza Conservatory with a summa cum laude degree in 1987, after which he devoted himself to the jazz language which had fascinated him from his childhood. In 1992, in trio with Sandro Gibellini e Mauro Negri, he won the first prize for the performing group section at the Barga Jazz International Contest.  In 1996, after the releasing of his first trio album “Fair Play”, he was nominated “Best New Talent” by the critics of the magazine “Musica Jazz."  His career has offered him the opportunity to perform with jazz legends such as Lee Konitz, Buddy De Franco, Art Farmer, Johnny Griffin and many other internationally-known artists including Scott Hamilton, Gianni Basso, Ruud Brink, Eliot Zigmund, Bobby Watson, Ronnie Cuber, Harry Allen, Tom Kirkpatrick, Charles Davis, Enrico Rava, Erwin Vann, Aldo Romano, Richard Galliano, Robert Bonisolo, Paolo Fresu, Tiziana Ghiglioni, Chuck Israels, Matt Renzi.  As a sideman he has contributed to the recording of over 50 albums by some of the most important jazzmen working in Italy; in particular the artistic relationship with saxophonists Pietro Tonolo, Emanuele Cisi, Claudio Fasoli and the american trumpet player (living in Italy) J Kyle Gregory has been more continuative, as documented in a series of works published by independent labels, including Egea, Splasc(h), Soulnote and Velut Luna. He is a regular member of the Lydian Sound Orchestra directed by Riccardo Brazzale, one of the most critically acclaimed Italian bands in the recent years. As a leader or co-leader he has released several albums in solo, duo and trio: his last releases include “Sbàndio” (Almar Records), a solo piano performance based on the cultural traditions of his native region in Italy, and “Passion Flower” (Philology) an homage to the music of Billy Strayhorn recorded together with the saxophonist Lee Konitz and “Radiotrio” (Almar Records) with Federico Malaman (el. bass) and Mauro Beggio (drums).
As an educator he has taught Jazz piano, improvisation and ensemble at the ”Civici Corsi di Jazz” (Milan), International Jazz Master Classes at Siena, Jazz Department of the Bologna Conservatory, “Il Suono Improvviso” (Venice), Perugia Classico, Summer stages at Loano, and the Jazzinty Workshop in Novomesto (Slovenia).  He is currently Head of the Jazz Department at the Conservatory of Vicenza.

Tell us what you think of Alex Garnett Presents...Paolo Birro Trio below..