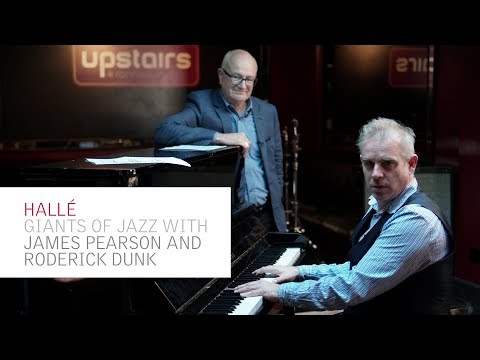 In this whistlestop tour James Pearson salutes the greats of jazz piano. From early ragtime, Harlem stride to mainstream swing and bebop, secrets of the greats will be revealed as we look at the different playing styles of pianists like Oscar Peterson, George Shearing, Bill Evans, Bud Powell, Thelonius Monk, Jellyroll Morton, Fats Waller to name just a few. Even the famous ‘Count Basie ending’ will be explored!

In addition James will look at some of the aspects of their lives in relation to their work as musician, and as ever, the musical examples will be interspersed with anecdotes in this fun celebration of 100 years of jazz piano.

He is the Artistic Director at Ronnie Scott's Jazz Club where his trio are the house band. There last album ‘Swing the Club’ recorded live at the venue received excellent reviews across the board.

The recording was ranked at No.6 in the Sunday Times albums of 2009 and they were delighted to sell out four nights at the legendary Birdland Jazz Club in New York.

James is equally at home as a concert pianist. He has played concertos with the Philharmonia and the BBC Concert Orchestra amongst many others. His performance of Rachmaninoff’s 2nd piano Concerto was broadcast on Classic FM and Gershwin’s Piano Concerto and Rhapsody in Blue on BBC Radio 2. With collaborations ranging from Paul McCartney to Wynton Marsalis James is fast becoming one of the country’s most sought after pianists.

Recent commissions by the BFI and BBC have seen James back in the composing chair. The Big Smoke, commissioned by the BFI is collection of footage of London accompanied by an 80-minute score composed by James. His work can also be heard performed by Brodsky String Quartet, Sir John Dankworth, The BBC Concert Orchestra and The BBC Big Band.

There will be no slowing up of James’s output this year. He will be back in the studio this year to add to add to his already impressive tally of over 50 album credits. More news on this very soon.

James Pearson is one of the countrie’s most respected musicians. His work covers all genres of music, especially contemporary music, jazz and classical. He graduated from the Guildhall School, having completed his degree and the Advanced Solo Studies Course. Whilst at college he studied with Robert Saxton, Francis Shaw, Peter Bithell and James Gibb. He regularly performed with the symphony orchestra, including a concert at the Barbican with Takemitzu.

James has broadcast on all the major radio and television networks. Classic F.M broadcast his concert of Rachmaninoff’s 2nd piano concerto, and BBC Radio 2 broadcast his performance of the Gershwin Piano Concerto and Rhapsody in Blue. He was the pianist in the Steve Martland Band. His work as a Jazz musician has taken him all over the world. This year his trio The James Pearson Trio played a four-night run in Birdland Jazz Club in New-York. His fine piano playing and arrangements can be heard on over 50 albums

Chris Higginbottom is one of the UK’s most in-demand drummers, currently a member of the Kyle Eastwood band and the Ronnie Scott's All Stars. A Royal Academy of Music graduate, Chris lived in New York for eight years where he played with many of the biggest names in jazz including Mark Murphy and Seamus Blake.

He has performed all over the world including the Blue Note clubs in Tokyo and Beijing, Birdland in New York, the House of Blues in Chicago, The Roxy in LA, Montreal Jazz Festival, Marciac Jazz Festival, and countless other venues.

Since relocating to London in 2010 Chris has also performed/toured with the BBC Big Band, Westlife, Marti Pellow, Georgie Fame, Carleen Anderson, the James Taylor Quartet, Lisa Stansfield, Gabrielle, and Omar. He has released two albums as a leader - 'One' (2005, Basho records), and ‘Where Land Ends’ (2013, F-IRE). Chris is endorsed by Canopus drums and Zildjian cymbals.

Sam Burgess is a bassist, instrumental composer and producer and has been a member of the Ronnie Scott’s house band for 13 years.

Originally attending Guildhall School of Music, Sam has made a career out of performing and recording, playing electric and double basses.

Sam recently collaborated with Gabrielle (Dreams, Out Of Reach etc), and has one song ("Won’t Back Down") on her latest album, Under My Skin.

Sam has a portfolio of hundreds of recorded instrumental songs, of various styles, and has recorded on many films and TV tracks including Hannibal, Fantastic Beasts and Where To Find Them and Pete’s Dragon. Sam has recorded with many artists including both Robbie Williams’ swing albums, the Divine Comedy, the Pet Shop Boys, Sheridan Smith, Gabrielle and Westlife etc.

Sam also wrote and recorded all the Trinity School of music bass books/CDs.

Tell us what you think of SUNDAY JAZZ LUNCH: 100 Years of Jazz Piano with James Pearson below..