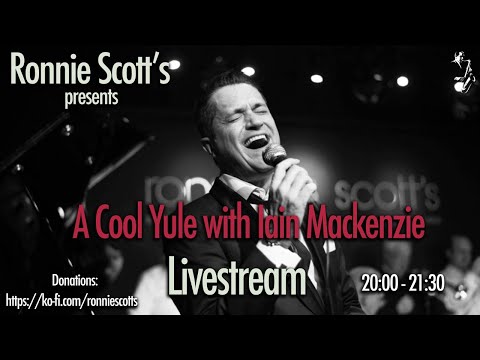 As Christmas has been made even harder this year we want to give you back a little cheer in these times.

Doors are closed to live audiences but we can still give you some live music.  The show will be at 8pm GMT.  The livestream will appear live here so simply bookmark this page. It is also available directly from our Facebook and our YouTube channel.

Straight from the Cool School of Frank Sinatra, Mel Tormé and Nat King Cole, Ronnie Scott’s Jazz Orchestra vocalist Iain Mackenzie teams up with the Ronnie Scott’s All Stars; James Pearson, Sam Burgess, Chris Higginbottom and Alex Garnett, to ease us through the days between Christmas and the New Year. Expect a selection of swingin’ favourites and seasonal songs that we all associate with the Cool Yule of times gone by.

Coming from a pedigree of British jazz musicians to have passed through London’s Guildhall School of Music and Drama, Iain Mackenzie is one of the top jazz and big band vocalists in the UK. Performing with numerous world class ensembles, including the BBC & RTÉ Big Bands and Concert Orchestras, Iain is currently the principal male vocalist with the Ronnie Scott’s Jazz Orchestra and resident singer at The Ritz in London.

Iain has performed with a wide variety of notable artists, including Sandie Shaw, Joss Stone, Mica Paris, James Tormé, Jimmy Somerville, Sophie Ellis-Bextor, Imelda May and Susan Boyle. He has recorded new material for Don Black and performed live for ‘In Conversation with Don Black’. For the past 8 years, Iain has toured the UK as a featured singer with Strictly Come Dancing’s Brendan Cole for all of his spectacular shows. Next year, Iain will be touring again with legendry DJ Tony Blackburn for his BBC Radio 2 The Sounds of The 60s tour.

Iain’s original material with Club Des Belugas, JoJo Effect, Tape Five, Bebo Best, Zouzoulectric and Bureau Largo is featured on over 100 compilation albums, and his debut lounge album ‘Blow Your Horn’ was released on ChinChin Records in 2015. In 2016 Jazzizit Records released his Big Band album of original songs, ‘A Swingin’ Song Book’ - co-written with Geoff Gascoyne. Iain is, once again, a featured artist on Club Des Belugas’ 11th studio album ‘Strange Things Beyond The Sunny Side’, released in earlier this year.

Tell us what you think of LIVESTREAMING TONIGHT: A Cool Yule with Iain Mackenzie below..