Classical Kicks has been wowing audiences at Ronnies aswell as various festivals and stages  around the world for almost 10 years, with their unique down to earth to upbeat classical performance mixed with the best of jazz, classic songs, and more. Classical Kicks’ founder, violinist, vocalist and creative producer Lizzie Ball and her team of incredible musicians are excited to bring you a specially curated show for the Ronnies LiveStream sessions, packed with their signature blend of folk, jazz classics, songwriting greats, popular classical and more, co -hosted with the amazing playing and beautiful musical arrangements of Ronnie’s very own James Pearson. 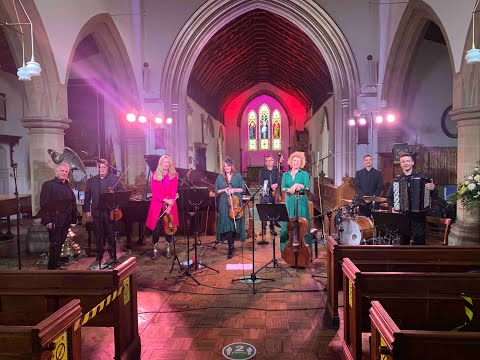 Born in north of England and based in London, Lizzie is a musician, concert producer and founder of Classical Kicks Productions. A violinist, singer and prolific performer, Lizzie has been on the international stage professionally for nearly two decades. Gathering a building reputation as somewhat of a changemaker in the UK classical scene, Lizzie was chosen in December 2018 by the national UK newspaper The Daily Mail as one of the UK’s most inspirational females in a list of 50 outstanding UK women making an impact, and was soon after awarded an Honorary Masters from The University of Derby, UK, in recognition of her achievements in the field of music and her innovative and creative approach to classical music.

Lizzie has spent much of her career creating her own successful projects. Most notably in 2012 by Ball, Classical Kicks’ ongoing mission is to bring classical music to a wider audience in a relaxed context. The residency in the upstairs venue at Ronnie Scott’s, has included everything from string quartets to beat boxing flute players and East End female rappers, and has also given performances in festivals, schools and churches from a newly commissioned young-persons show to a electronic music meets classical instruments collaboration with BBC Radio 1 DJ and UK Bestival Founder Rob da Bank: all presented with a classical twist. In November 2019 Lizzie curated and performed a headline event at Ronnie Scott’s Main House with acclaimed UK choir The Sixteen and Harry Christophers together with together with special guests James Pearson on piano and Martynas Levickis on accordion.

Lizzie has also continued to build her impressive career as featured soloist and orchestra leader for some of the biggest names in entertainment, including Hugh Jackman, Jeff Beck, Ariana Grande, Brian Wilson, Liam Gallagher, Grammy-award winning New York Polyphony and many more, with an impressive list of countries, venues, and touring schedules under her belt. Lizzie also holds a long- term collaboration with Nigel Kennedy. She has featured as a duet soloist with him, aswell as being concertmaster of Nigel’s handpicked ‘Orchestra of Life’ for 8 years-a position she was proud and honoured to be chosen for by Nigel. Other highlights include a U.S wide tour as featured vocalist with Brian Wilson and featured violinist with Jeff Beck on the same double bill, aswell as headlining Madison Square Garden with Jeff Beck for Eric Clapton’s Crossroads Guitar Festival in 2013.

Lizzie’s ongoing collaboration with accordion virtuoso, Martynas Levickis is one that she values immensely and earlier this year Lizzie was appointed Guest Director of his fantastic Mikroorkestra, a young daring and vibrant chamber ensemble based in Vilnius, Lithuania. Together they have performed unique and creative programmes, including a fully immersive version of Schoenbergs Verklarte Nacht, with 3- way video projections of original commissoned artwork. Earlier in 2020, pre-pandemic, Lizzie was delighted to feature as a special guest artist in an Arena Tour of Lithuania performing in Martynas Levickis production ‘Cinema Live’. They played to a total of over 20,000 people both singing and playing.

Lizzie graduated from St.John’s College, Cambridge and continued her postgraduate studies at both the Royal College of Music and Guildhall School of Music. She plays a beautiful new violin made in 2019 in the style of Antonio Stradivarius by award-winning Hungarian luthier Gabor Draskocksy.