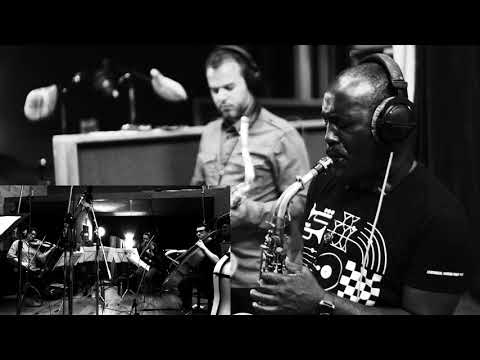 The Nigel Price Organ Trio, who have been nominated for the 2021 Parliamentary Jazz Award for 'Best ensemble' (they won in 2010) and winners of the 2016 British Jazz Award for ‘Best Small Group’ will be playing the whole of the recently released and critically acclaimed 'Wes Re-Imagined' (2021 Ubuntu) with the entire line up from the recording session.

The album celebrates the compositions of jazz guitar icon Wes Montgomery, reworked into new, exciting and unexpected feels. They will be joined tonight by the jazz saxophone virtuosos Vasilis Xenopoulos (tenor) and Tony Kofi (alto), the legendary Snowboy on percussion and the Phonograph Effect String Quartet, under the guidance of the incredible arranger/trombonist Callum Au. Expect a night of exciting interplay, outrageous solos and a few laughs too!

Nigel Price Over a career spanning more than 25 years, 30 tours, and more than 50 albums, Nigel has become widely acknowledged as one of the hardest working musicians in the business. Musically, his blend of flowing bebop lines, deep blues sensibility and his mastery of chording has earned him a reputation as one of the best UK jazz players of all time. Citing early influences as Wes Montgomery, Joe Pass and John McLaughlin, Nigel honed his craft by attending gigs and sitting in with the players of the time. Thirty years later he’s been describe as a ‘stalwart of the UK jazz scene’ Nigel has toured the uk 11 times with his own group, played on more than 50 albums including 7 as a leader, spent 10 years with acid jazz outfit The Filthy Six, was a member of James Taylor’s band for 3 years (with whom he recorded 5 albums) and performed with the legendary David Axelrod. He picked up a British Jazz Award for Best Guitarist, 2016.

Nigel is a regular performer at London’s Ronnie Scott’s Jazz Club where he has made more than 600 appearances.

Ross Stanley is widely recognised as one of the world's finest organists.

He is one of the only musicians in the UK who takes the 'real' instrument on the road with him. Beginning piano at age 4, by his teens he was awarded an organ scholarship to Marlborough College. Upon leaving Marlborough, Ross was invited to study for his music degree at several renowned institutions including Trinity College of Music, Guildhall School of Music and a scholarship to Berklee College of Music in the USA. He gained a BMUS in classical and jazz piano at Guildhall in 2004. Since leaving, Ross’s musical skills have kept him in high demand, seeing him play with jazz names such as Will Vinson, Dennis Rollins, Guy Barker, Joel Frahm, Liane Carroll, Stan Sulzman, Steve Arguelles, John Paracelli, Bobby Wellins, Clark Tracey, as well as being a regular member of the Jim Mullen Organ Trio, the Mark McKnight Organ Quartet, the Phil Robson Trio and the Jacqui Dankworth, Nostalgia 77 Octet, and The Heritage Orchestra. Ross has also toured with Steve Howe Trio, Deodato and has recorded for Goldie, US3, Trevor Horn and Simply Red among others. Ross is a Hammond endorsee.

Vasilis Xenopoulous is considered to be one of the most accomplished Greek contemporary musicians of his generation. His style of playing has often been described as a briskly fluent approach to the saxophone with references to Dexter Gordon, Hank Mobley and Sonny Rollins. He will be joining the core trio for most of the dates.   The United Kingdom became his permanent home after graduating from the infamous Berklee College of Music in Boston, and gradually established himself as one of London’s most in demand saxophonists. He is a regular at most venues and festivals in the UK playing alongside some of the finest and multi awarded British jazz musicians such as Pete King, Alan Barnes, Alex Garnett, Bruce Adams Steve Waterman, Jim Mullen, Dave Newton, Derek Nash, Alec Dankworth, Dave Green, Bobby Worth, Steve Brown and many others.

Snowboy is without doubt, the country’s best known Latin percussionist and has recorded or performed percussion with many, many Jazz and Latin artists such as Airto Moreira, Deodato, Makoto Kuriya, Herman Olivera, Flaco Jimenez, Jon Lucien, James Taylor Quartet, Big John Patton, and Incognito as well as Lisa Stansfield, Imelda May, Amy Winehouse, Rod Temperton, Mark Ronson, Basia, Simply Red, Mick Hucknall, Mica Paris, Darrel Higham, Patti Austin and many, many more. More importantly he is also the leader of his world - famous Afro-Cuban Jazz group, featuring a who’s-who of the UK’s most exciting and fiery Jazz and Latin players.

Callum Au Over the past ten years, Callum has established himself as one of the busiest arrangers and orchestrators in the country. He has had the privilege of writing music for many international artists, including Quincy Jones, Jamie Cullum, Randy Brecker, and the Royal Philharmonic Orchestra. In 2019, he was commissioned to arrange the big band numbers in the Hollywood movie adaptation of Andrew Lloyd Webber’s ‘Cats’.

A fascination with the classic arrangements of Billy May and Nelson Riddle has seen him transcribe several hundred classic big band vocal charts of the ‘50s and ‘60s. These charts have been sung by many of the world’s finest jazz singers, including Matthew Ford, Clare Teal and Dee Dee Bridgewater. As well as being a busy writer, Callum has been a member of the Ronnie Scott’s Jazz Orchestra since 2012, one of the UK’s premier large jazz ensembles, with a performance schedule to match. He has also composed or arranged a substantial proportion of the band’s current working repertoire. Callum has performed alongside top jazz stars including Curtis Stigers, Seth MacFarlane, Maria Schneider, and at venues including the Cheltenham Festival, the Royal Albert Hall, and Buckingham Palace. He has worked with most of the top big bands and jazz ensembles in the UK, for multiple West End musicals, at the BBC Proms, and as a session musician on many recordings for film and TV.

Phonograph Effect Strings: Formed in April 2020 by Kay Stephen and Chris Terepin, this hip little ensemble are made of some of the finest string players in the UK and are already making waves in the classic, jazz and pop world. Their execution of arrangements is simply stunning and they always convey every last drop of emotion to audiences.