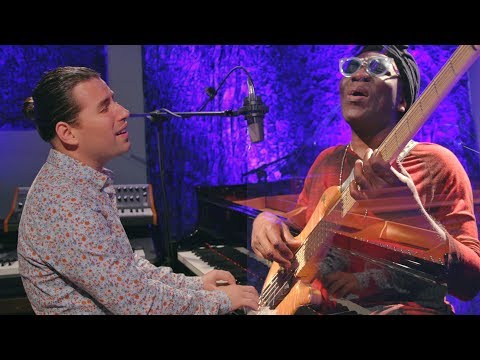 Alfredo Rodriguez and Richard Bona first became aware of one another’s talent through their shared mentor, Quincy Jones. After years of friendship, the duo went into the studio to work together on Rodriguez’s album Tocororo, which was produced by Quincy Jones. On the album, they released two songs together, Raíces (Roots) and Ay, Mamá Inés that showcase how their unique musical backgrounds can cohesively come together to produce inspiring sounds.

After meeting Quincy Jones at the Montreux Jazz Festival in 2006, Alfredo left Cuba and his family behind to immigrate to the United States to pursue his dream. Alfredo was schooled in the rigorous classical conservatories of Havana.

His riveting artistry is informed as much by Bach and Stravinsky as it is by his Afro Cuban and jazz roots. Over the past decade, Alfredo grew from a young local Cuban artist to a globally recognized GRAMMY-nominee.

Hailing from a small town in Cameroon, Richard Bona became fascinated with the great American bassist, Jaco Pastorius, at a very early age. Pastorius inspired him to pick up the instrument, and years later, Bona would eventually become one of the most highly-acclaimed bass players in the world. After winning his first GRAMMY in 2002, his fourth-studio album Tiki was nominated for “Best Contemporary World Music Album” at the 49th GRAMMY Awards. He has dedicated his 30+ year career to promoting peace, happiness, and unity through his music, and is currently fulfilling his mission of touring every country in the world.

The duo can now be seen together on the GRAMMY-winning Netflix documentary QUINCY. They are back in the studio together creating new music that they will tour around the world in 2021.

Bassist/vocalist RICHARD BONA, born and raised in Cameroon, arrived in New York in the mid-’90s and wowed crowds with his unique sound and presence. Some even outrageously hinted that Bona was the second coming of Jaco Pastorius. But even though he recorded with the Jaco Pastorius Big Band project, he soon rebuffed the comparisons and showed his own true voice with his impressive Scenes From My Life debut album in 1999. The year earlier he was enlisted to be the musical director for Harry Belafonte’s European tour and in 2002 toured the world as a member of the Pat Metheny Group. His latest project is his spirited Afro-Cuban group Mandekan Cubano which melds together a variety of roots music, from Africa, South America and of course Cuba. Bona’s six-piece band includes two percussionists making this celebration ripple and soar.

Originally from Cameroon, Bona remains true to his roots, with African rhythms reflected in each of his seven albums; the first three, Scenes from My Life, Reverence and Munia display his unique approach to storytelling through sounds. Seeking inspiration from his origins, the themes of Bona’s albums address international issues which mirror his desire of using music to take a stance on issues affecting the oppressed. With numerous awards, performances, and years of expertise, Bona has become one of the most accomplished and sought-after musicians of this generation. Receiving the prestigious Victoires du Jazz Award for “Best International Artist of 2004;” confirmed his ability to appeal to a multitude of audiences ranging from jazz, pop, bossa nova, traditional, afro-beat and funk. Bona’s role in the group, Steps Ahead, Bona has performed on many stages such as the Adelaide International Guitar Festival and with many luminaries such as John Legend for his album, Tiki, which was also nominated for a Grammy in 2007 for “Best Contemporary World Music Album.” Despite the fact that he spent the entirety of 2008 and 2009 on a non-stop tour, Bona released The Ten Shades of Blues, lending an aural guidebook to his experiences with the different shades of the blues found in far-flung locations such as the Sahel, Brazil, India, United States and Cameroon. The Festival International de Jazz de Montreal has duly honored Bona with the Antonio Carlos Jobim Award; distinguishing him as an artist in the field of world music whose influence on the evolution of jazz is widely recognized. He also received the prestigious SACEM Jazz Award (Grand Prix Jazz SACEM) in 2012 for the Jazz Grand Prize. Additionally, his certified Gold 2013 album, Bonafied, demonstrates a fusion of cultures in which he is continuously developing into his Mandekan Cubano.

Quincy Jones says when he first heard Alfredo Rodriguez play, "it knocked me on my booty, man."

From an early age, Alfredo Rodríguez's life revolved around music. Born in Havana, Cuba in 1985, and the son of a singer with the same name, music was in his blood. At first, Alfredo wanted to be a drummer. But when he arrived at Havana's Manuel Saumell Elementary Classical Music Conservatory at age seven, he was given the choice of the piano or violin. He chose piano, assuming that when he turned 10 (the age the conservatory allowed), he'd switch to the drums. His musical potential, however, was not obvious to his instructor. At the end of the first year of conservatory and in front of the entire classroom his instructor told his parents that they should remove Alfredo from the conservatory because he'd never be good enough to be a musician. Undaunted, Alfredo stuck with it. By the time he was 10, piano was his life. At 14, he was the school's prize pianist and the student chosen to play at graduation. He also wound up graduating first in his class, with the highest marks the conservatory had ever seen.

Alfredo quickly became a go-to producer and musical director for some of Havana's most famous musicians, including his father. He also scored a number of popular Cuban television shows.  Then in 2006, Alfredo was accepted at Montreux Jazz Festival. That same year, after hearing Alfredo play at Montreux, Quincy Jones asked his staff to figure out a way to work with this gifted, young, jazz pianist. After 2 and a half years of work, Alfredo has become an international sensation.