Kid Creole and the Coconuts

Kid Creole and the Coconuts 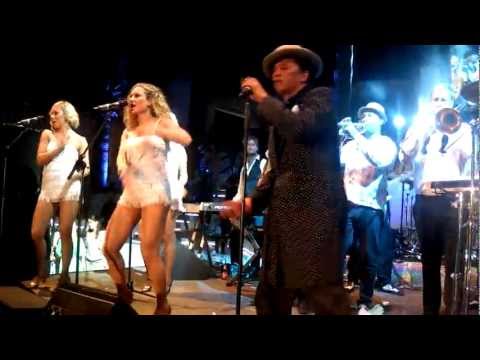 KID: ‘The opportunity to end 2021 with a bang at Ronnie Scott's is a blessing! When I sent the word out to my musicians, the answers came back from my usual suspects faster than lightning: "Count me in!" was the rallying cry.

Music lovers of all stages and persuasions. Get ready for the greatest show on earth!

This is guaranteed to be a night to remember, 41 years in the making! There is no better way to say goodbye to 2021 and hello to 2022.

Here's looking at you, Kid!

Kid Creole: 'CALL ME THE ENTERTAINER. Or you may call me August Darnell. But I am better known in most circles as Kid Creole. I've been called the Sultan of Suave, the High Priest of Hip, the King of Pizazz, the Tropical Gangster, etc., etc., etc.  I once penned a song called I'm a Wonderful Thing, Baby. That says it all... almost.

I was born in the Bronx. That's in New York City. Thank the gods, because that meant I was exposed at an early age to the sounds of Latin, Disco, Funk, Calypso, Reggae, Jazz, Swing, Rhythm and Blues, Soul, Country & Western, and Rock 'n' Roll. The Bronx was a true melting pot. All you had to do was survive and you could reap the benefits of that diverse, heaven-sent hell hole!

My older brother, Stony Browder Jr., was the absolute greatest influence in my young life. He bestowed upon me an addiction to music and he taught me that music would provide all the escapism one ever needed in life. He was correct. Without Stony I would never have had the courage to walk that lonely, unpredictable road in search of fame and fortune.

When my brother formed a band called Dr. Buzzard's Original Savannah Band, I became his right-hand man. Stony wrote the music. I wrote the lyrics. Stony played piano and guitar. I played bass. We both sang background vocals. The lead vocals were carried by the inimitable Cory Daye.

I learned a whole lot from Stony and Cory. When I was ready to spread my wings and create my own band, I knew I would carry their influence with me for a very long time.

I had no idea that in 2021 I would still be singing and swinging and dancing and prancing. And still enjoying it! That’s the remarkable part!

Album number 16 was released this year on my own label, 2c2c. It’s called Nothin’ Left but the Rest. Critics have already jinxed it by calling it “arguably the best KC&C album ever released.” No pressure there!

Album number 17 is due next year, in 2022. The working title is MAN OVERBOARD! Worry not, the sharks are finally harmless and quite friendly.

If I’m lucky, 2022 might also see my stage musical, fittingly called Cherchez la Femme, on a West End Stage in London. I’ve been working on that mission for 8 years!

But, as Bloody Mary once said on a tropical island in the sun, "If you don't have a dream, how you gonna have a dream come true?"