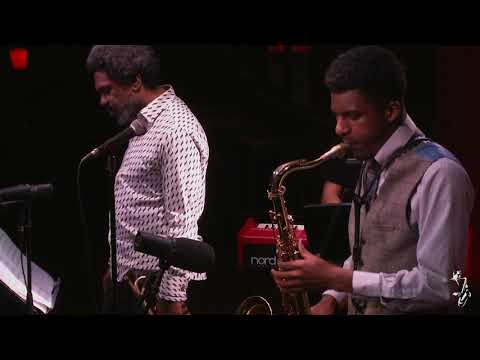 Xhosa Cole’s deep and authentic connection to the lineage of jazz music has helped to establish him among the most exciting young talents in the country.

Critically acclaimed saxophonist, flautist and composer, Xhosa is an embodiment of the success of numerous community outreach arts programmes in Birmingham. Having started playing tenor saxophone at Andy Hamilton MBE’s Ladywood Community Music School, Xhosa has now established himself among the long legacy of Birmingham saxophonists including Soweto Kinch and Shabaka Hutchings.

Xhosa’s early career was shaped by a number of musical mentors including the likes of Sid Peacock, Jean Toussaint, Mike Williams, John Ruddick and Percy Purseglove, giving him a varied outlook on his approach to development and a deep connection to the lineage and tradition of jazz music.

More recently it has been various collaborative, performance and compositional opportunities that have forged his development and helped to establish him as an emerging name on the UK scene.

In 2018 he was the recipient of the BBC Young Jazz Musician of the Year Award and has since: performed alongside artists including Monty Alexander and Courtney Pine and as a soloist for the BBC National Orchestra of Wales; had the opportunity to perform at prestigious venues and events including the BBC Proms, Birmingham’s Symphony Hall and Ronnie Scotts; and In 2020 received the Parliamentary Jazz Award for Best Newcomer as well as having been nominated for the Jazz FM Breakthrough act.

Although the majority of Xhosa’s creative output is centred around the jazz idiom from free improv to bebop, he has recently begun to breakthrough as an up-and-coming composer. Some of his recent commissions have been from the Ideas of Noise Festival, Flatpack Film Festival, Ripieno Players, For-wards & Town Hall Symphony Hall. Much of his writing is informed by his time engrossed in the Jazz cannon, however through composition he has explored a multitude of muses including Arithmetic and Geometric Maths, Biology, Classic Wester Harmony and elements of traditional Yoruba Culture an Music.

At this stage in his career he is continually learning, developing and growing; in keeping with this great tradition. His exposure to players from a range of different traditions and outlooks compounded by his strong connection to his inner-city community in Handsworth at the heart of Birmingham has helped to develop a fiercely unique and independent voice.