Unfortunately due to illness (COVID) the artist is unable to perform tonight but we have the wonderful Michael Janisch performing instead.

A US-native who has lived in London for 17 years, he's established himself as a first-call electric and double bassist to the stars, a MOBO-Award nominated solo artist, an in-demand producer, and founder of Whirlwind Recordings, one of the premiere indie labels in jazz and related music.

His latest release Worlds Collide is an electro-acoustic joyride of original material recorded at Abbey Road Studios, combining contemporary jazz alongside free improvisations and soaring melodies over multi-metered grooves, paying homage to artists as diverse as Ornette Coleman, Fela Kuti & Afro-Beat to the electronic music pioneer Aphex Twin. The album has been a hit on streaming sites with well over 1,000,000 global plays to date as well as one of 2019's most talked about and covered releases.

Joining Janisch (on basses) for his live shows is his London-based band which showcases some of the finest performers in the UK today: Nathaniel Facey on alto saxophone (Empirical, Gary Crosby OBE), George Crowley on tenor saxophone (Melt Yourself Down, Yazz Ahmed), Rick Simpson on piano/keys (Christian Scott, Leo Richardson), and Shane Forbes on drums (Soweto Kinch, Empirical).

Read about the band in Jazzwise here. 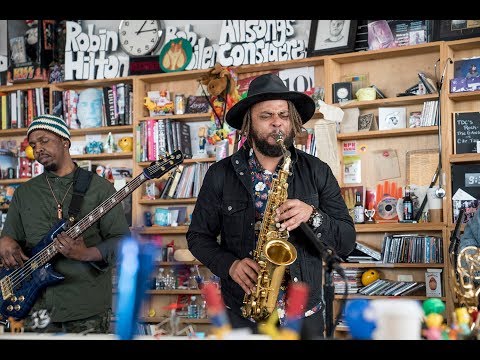 Thrashing and full of impact but endlessly slippery, Logan Richardson’s two-electric-guitar quintet remains guided at every turn by his alto saxophone. No one plays the instrument with the same sweltering, swooning grace." NY Times

This is 21st century music, sci-fi themed, sonically 80s and soundtrack styled. Logan Richardson’s Blues People invoke the past and reach forward with slicing solos, and heart-wrenching melodies, Richardson redefines through his alto saxophone the meanings of how, when and why.  The band goes deeper inside their melodic storytelling, while riding the tide of rhythms that no matter how varying, creating a homogeneous medley of urgency and sensuality while delivering airy sonics mixed with crunchy ground work from the rhythm section.

“Their rapport is tough and direct, more conducive to a snarling riff than to any flight of improvisational fancy and while the blues are a focal point, there's an implicit critique of 'authenticity' in this music.” Nate Chinen NPR MUSIC

Known for his adventurous, genre-bending jazz, multi-grammy nominated Logan Richardson is an American-born, Los Angeles -based alto saxophonist, composer, and producer. He has been a professional musician since he was 16, and came to wider recognition after moving to New York and issuing his 2007 debut, the post-bop-influenced Cerebral Flow. He has performed with a variety of jazz musicians including Joe Chambers, Billy Hart, Butch Morris, Greg Osby, Stefon Harris, the World Saxophone Quartet, Arthur Blythe, and Jason Moran. He is also a member of the Next Collective. While he is well versed in the jazz tradition, he has proven to be an eclectic, forward-thinking artist whose albums like 2015's Shift (which featured guitarist Pat Metheny) and 2018's Blues People showcase his love of mixing jazz with searing rock fusion, hip-hop, electronic rhythms, and Americana.

Richardson was born in 1980 in Kansas City, Missouri. His parents were both avid music fans who collected recordings ranging from vintage soul and R&B to Motown, funk, pop, rock, and gospel. He began formal musical education on the flute at the age of 12. At 14 he added alto saxophone while at the Paseo Academy of Fine and Performing Arts. His first exposure to jazz was seeing Max Roach live at the American Jazz Museum. While in high school he studied with visiting artists including Kenny Burrell, Frank Foster, Houston Person, Max Roach, Shirley Scott, Clark Terry, and Bobby Watson. Richardson also took advantage of jazz courses such as Jazz at Aspen, where he encountered Ray Brown, Bobby Hutcherson, Christian McBride, and Renee Rosnes. At age 16 he began performing professionally -- including a gig with Jay McShann. At 19, he left Kansas City, first for the Berklee College of Music in Boston, and then for New York City's New School University. In New York he studied with Hart, Greg Tardy, and Chambers as well as privately with Gary Bartz and Vincent Herring, among others. He began leading his own group in 2005. That same year he appeared on Chambers' The Outlaw. In 2006, he was a member of Tardy's studio band on Steps of Faith.

Richardson's debut as a bandleader was with Cerebral Flow, issued in 2007 by Fresh Sound, New Talent. It was followed a year later by Ethos on Inner Circle Music. He has been a member of drummer Nasheet Waits' (who appeared on Ethos) band Equality since 2009. In 2011, Richardsonplayed on Hart's universally acclaimed Sixty-Eight. In addition to playing music, he taught at clinics in New York. In 2013, the Next Collective issued Cover Art on Concord Jazz. The same year, Richardson contributed to Gerald Clayton's album Life Forum.

The saxophonist began to split his time between N.Y.C. and Paris, France, but made the European city his home base in 2014. He signed with Blue Note in 2015 and enlisted an all-star group to appear on his debut for the label: it included Waits on drums, bassist Harish Raghavan, Jason Moran on piano and Rhodes, and Pat Metheny on guitar. Entitled Shift, it was released in early 2016. In 2017 Logan Moved to Rome, Italy and soon after was the release of Richardson's fourth album as a leader, the sonically expansive Blues People, which arrived in 2018."

Living now in Los Angeles, California, 2022 has been a majorly expansive year for Richardson with release  blues PEOPLE in the Spring of 2022, in addition to a trinity of albums in the summer/fall season of 2022.